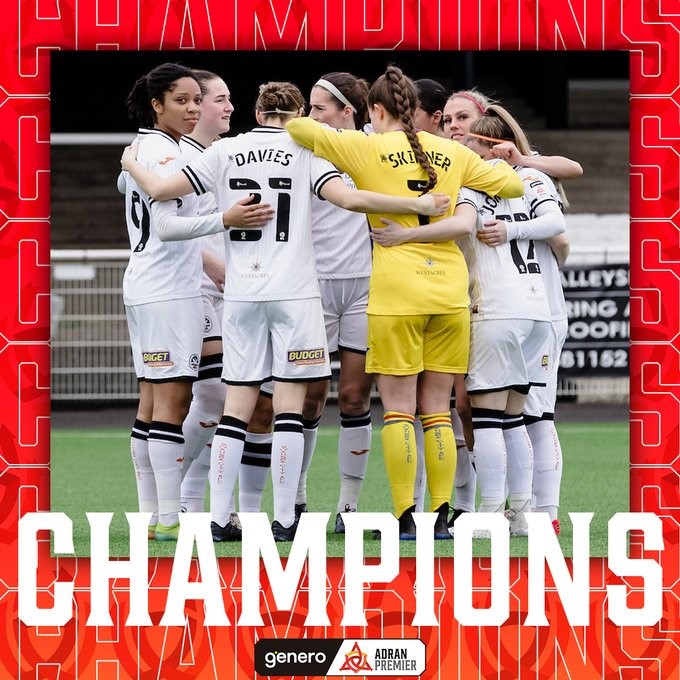 Lauen Hutton-Townsend had Cardiff Met ahead at the Cardiff City Stadium, until Zoe Atkins equalised two minutes before the break.

Atkins then gave the Bluebirds the lead early in the second half, only for Erin Murray to complete the scoring at 2-2 on 64 minutes.

Two more league trophies will be awarded on Sunday, with a double-header at Aberystwyth Town FC. The FAW U-16 Girls’ Cup sees Cardiff City FC take on Penrhyn Bay at 12:30, then the first ever Genero U-19 Play-Off has Cardiff City facing Wrexham at 3:15.

The Genero Adran League season comes to a close next weekend, with Swansea receiving their trophy when away at Cardiff Met, the Plate to be won by either Pontypridd Town or Port Talbot – although the latter could also be relegated.

Swansea City and Cardiff City FC are up to second and third respectively in the WPWL table but Cardiff Met extend their lead with a big win in the Cyncoed derby. Orchard Welsh Premier Women’s […]

Swansea City were up against Romanian hosts Olimpia Cluj as they looked to bounce back from a 5-0 Champions League loss to Hibernian but found themselves on the wrong end of a 3-0 scoreline. An […]