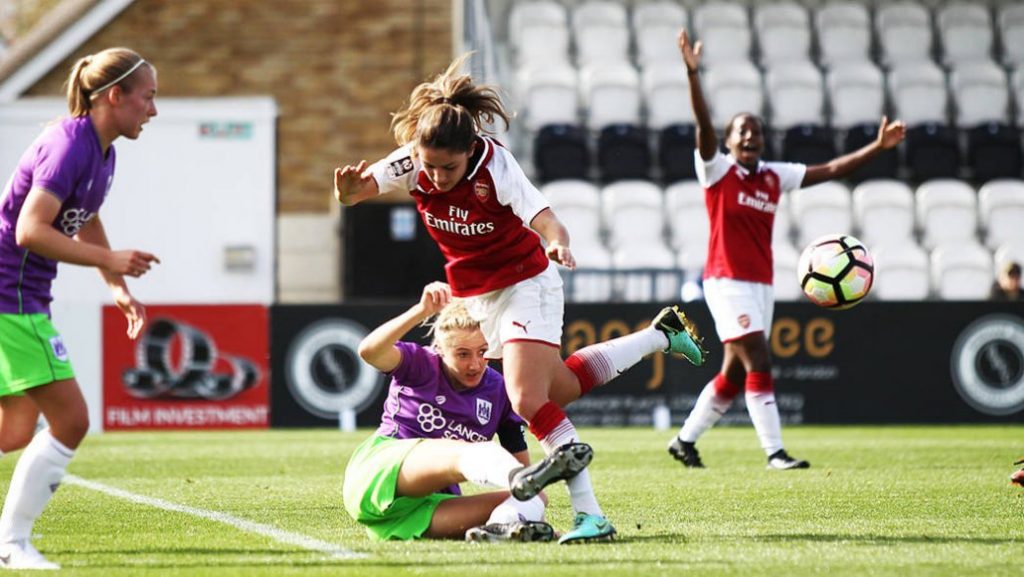 Arsenal slipped further behind the leading pair, after being frustrated in a 1-1 home draw with Bristol City.

Sophie Baggaley touched a Jordan Nobbs drive onto the crossbar and turned away a Vivianne Miedema effort for a corner, as Bristol City frustrated Arsenal in the first half.

It got worse for the Gunners on the half-hour, as Lauren Hemp cut inside to fire a great shot out of the reach of Sari van Veenendaal and inside the far post.

But 5 minutes after the interval the scores were levelled, Danielle van de Donk striking the ball past Baggaley from the corner of the six-yard box.

Van Veenendaal just got a boot on a Flo Allen close range chance and seconds later at the other end, Baggaley had to get down to thwart Miedema.

Chloe Arthur forced van Veenedaal to turn her powerful strike onto the bar, while Miedema should have made much more of an opportunity with the City keeper out of her area.

With time running out, Beth Mead was through on goal but Baggaley behind the shot and Jodie Taylor wide with the rebound.

Reading built a 2-0 lead over Birmingham City but the visitors battled their way back onto level terms at the death.

The Royals took the lead from the spot on 21 minutes, Brooke Chaplen won a penalty and got to her feet to convert it.

Charlie Wellings soon went close to an equaliser but for a crucial block but then Jade Moore picked the ball up 25 yards out and rifled it into City’s net.

Emma Follis saw her shot well saved by Mary Earps before Wellings was put through only to miss the target.

However, the Blues did get a goal back in first-half added-time, Aoife Mannion scoring from the spot after Harriet Scott fouled Follis.

Kirsty Linnett’s header came back off the bar for the Royals, with the referee waving away claims that it crossed the line. 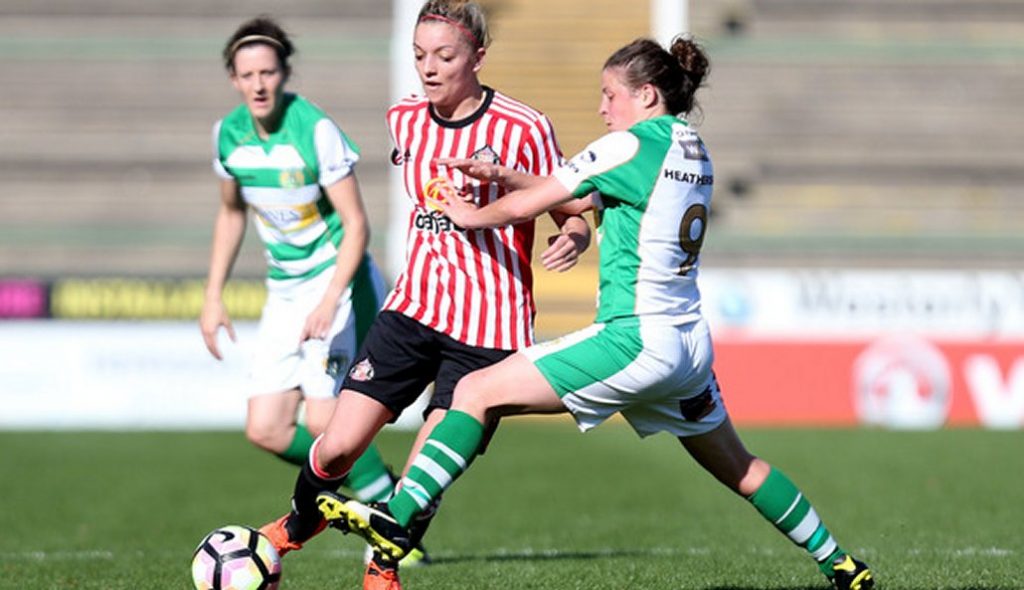 A single goal on the road was again enough for the Black Cats to capture maximum points.

Sunderland got a first-half lead at Yeovil soon after Keira Ramshaw saw her effort turned round the post by keeper Megan Walsh. From a corner, Ramshaw then bundled the ball home.

The Glovers threatened to get the goal back but Kayleigh Green’s whipped cross was cleared by Victoria Williams.

Sunderland struggled more to clear through when a Yeovil corner led to a huge scramble in the box.

The lead might have been doubled late on. Abby Joice slipping the ball between defenders for Simona Koren but Walsh just got there first.

Zoe Ness headed Durham in front from a Jordan Atkinson cross on 39 minutes, after there had been chances at both ends.

Helen Alderson tipped an effort from Anneka Nuttall over the bar and a free-kick wide of the post, while Ness was twice denied by the woodwork and, while Atkinson’s floated cross hit the bar.

The lead was doubled 10 minutes into the second half, as Sarah Wilson’s ball was nodded on by Ness and Abi Cottam slid it home.

Beth Hepple curled a fine free-kick over Fran Kitching to make it 3-0 and when Watford failed to fully clear a corner, Kathryn Hill completed the scoring.

Tottenham Hotspur secured their first ever WSL away points with a 2-1 victory at London Bees.

The visitors were ahead on 16 minutes, after Sarah Wiltshire’s strike was blocked, Coral Haines crossed to Renne Hector, who in turn found Wendy Martin to poke home.

Seven minutes later it was 2-0 as Ashleigh Neville won possession in the final third and played the ball across for Martin to net her second inside the near-post.

London Bees halved the deficit shortly before the break, Evie Clarke playing in Jo Wilson to tap in.

They might have got a late leveller but Destiney Toussaint’s cross to the far-post was acrobatically fired over by Wilson.

Millwall eventually fought off Hope Powell’s Brighton to register a 4-3 success and go top of WSL 2 by virtue of goals scored.

There was just the one goal in the first period, as Aileen Whelan slotted past Sarah Quantrill to put Albion ahead.

Millwall turned the game in their favour during a three-minute spell, as Leighanne Robe knocked on Ashlee Hincks corner and Leanne Cowan levelled, before substitute Bonnie Horwood put them 2-1 up.

Lucy Somes nodded Brighton back on level terms 5 minutes later but the hosts regained the lead as Ella Rutherford was quick to react to slot home.

Hincks was sent clear on 80 minutes to give Millwall a two-goal cushion but Brighton made it a tense finish as Ini Umotong won a spot-kick which Dani Buet converted, with Somes and Jenna Legg then going close to an equaliser.

Doncaster took the lead midway through the first 45 at Oxford, Leandra Little knocking down a corner ball and Christie Murray volleying into the net.

The visitors nearly had a second on 41 minutes though, a scramble in the box ending with a block by Ellis Hillman.

Oxford cancelled out Belles’ opemer on the hour mark, a fast break ending with Short playing in Chivers who finished well.

Doncaster might have thought they had got the winner on 83 minutes. when Rebecca Rayner robbed Short inside her own box and teed up Murray for the finish.

But 3 minutes into injury-time, Kayleigh Hines dramatically found the bottom corner of the Belles net.

Even so, Sophie Barker would have got a decider for the visitors but for Demi Lambourne save right at the death.

Sheffield FC made the best of starts, as they went on to take all three points in a 2-1 home win over Aston Villa.

With under a minute played, Chloe Dixon’s cross found its way in as Sian Rogers was unable to deal with it.

Dixon then doubled up at the end of the half, her effort from distance going in off the far post.

Katie Wilkinson’s long range effort hit the home bar with 5 minutes left and moments later, Villa did pull one back.

When Sheffield don’t clear a free-kick, it drops to Kerri Welsh 6 yards out to poke home.

The hosts were pinned back afterwards but survived to hold onto the victory.

The quarter-final and semi-final draws for the remaining UEFA Women’s Champions League ties for the 2019-20 season took place in in Nyon this lunchtime. British interest focusses on both Scottish Champions Glasgow City and English […]

What we were watching: 🔥 ARSENAL 3 – 2 CHELSEA (FA Women’s Super League, 12.30pm KO, 5th September 2021, Emirates Stadium) Who was watching: @lawson_sv Hello, hello, after a long Olympic summer I wrenched myself from […]