Chelsea have announced that they have agreed terms to bring Anita Asante back to the club, with the defensive midfielder to join officially when the transfer window opens on Friday, 29th December.

Asante, who began her career with Arsenal and won many trophies whilst with the Gunners (including the domestic treble and UEFA Women’s Cup in 2007, a time when she also first worked with Emma Hayes who was part of the coaching staff), also played for Chelsea in 2008. 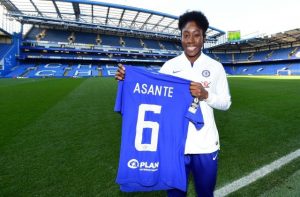 The Blues have revealed that she has signed a deal until May 2020 after announcing in November she would be leaving Swedish side Rosengard after four years with the club.

A defensive midfielder who is also capable of playing in central defence, the 32-year-old arrives with a wealth of experience at the highest level having competed in the Champions League, European Championships and World Cup finals, as well as winning a host of major honours.

Asante told Chelseafc.com: ‘I’m so excited to join the club. It’s a great football team, with a deep squad and I can’t wait to get started.

‘I’ve had the experience of playing here before, I have positive memories of that time and I’ve seen how much the club has grown since then, the success of the team and how they’ve developed. I feel I can be a part of that and contribute something.’

Manager Emma Hayes also told chelseafc.com: ‘Anita is a versatile central player who can play anywhere at the back or in midfield. I’ve heard Brazilian players saying she is good enough to play for their national team, which is high praise indeed, and she is a wonderful technical player who I’ve worked with before. She’ll bring great quality and character to the squad.’

Asante was a team-mate of Claire Rafferty and Eni Aluko at Cheslea after signing in 2008 but was subesquently given the opportunity to move to the US and play professionally for Sky Blue FC, a New Jersey-based club who Asante helped win the inaugural WPS Championship. She also played for Washington Freedom, where she linked up with Hayes for the second time in her career, and after another spell with Sky Blue, she then returned to Europe and won silverware in Sweden with Gothenburg and later Rosengard from 2013.

Asante made her debut for the senior England team in 2004 having represented the Lionesses across various younger age groups, and went on to be a part of squads at four major tournaments, as well as playing for Team GB at the London Olympics in 2012. It’s great to have her talent and personality, back in English women’s football.

#FAWSL: Crucial points to play for in midweek matches

FA WSL licenses have been granted to FA Women’s Championship top two, with promotions to the FAWC announced and Player of the Month awards also decided. The FA today confirmed that club licences for The […]

#FAWSL: Covid effects fixtures but Coventry United could be saved

While Covid effects the resumption of the Barclays FA Women’s Super League, there’s much better news for Coventry United. West Ham’s match with Manchester United was first to fall, followed by the Friday night fixture […]