On the evening of Thursday 24th, in Monaco’s Grimaldi Forum, the UEFA Players of the Year 2017 will be revealed. Three nominees have made the shortlist and are equally deserving, though we’re only human and we have our favourites…

We asked KATIE MISHNER to put forward the case for PERNILLE HARDER: 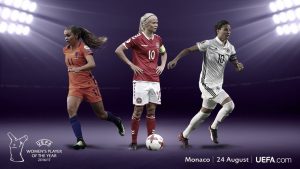 It is that time of the year again. UEFA have released their short list for their Best Player. This year, up for the presitigious award are Dzsenifer Marozsán, Lieke Martens and Pernille Harder.

Naturally, the nominations have sparked debate and rightly so – a strong argument could be made for all players to take home the trophy. Maroszan had a sterling year for her club Olympique Lyonnais as they won the treble, while Martens stunned an entire nation at the EUROs as the Netherlands won the whole thing and the midfielder was named Player of the Tournament.

However, in my eyes, Denmark and Wolfsburg’s Pernille Harder is the stand out player.

UEFA’s award is, in theory, dished out based on performance across the entire year. It is easy to ignore the whole picture after an exciting summer of international football, but consistency for club and country is a must when considering the winner of this award.

This is a box that I feel Pernille Harder ticks, more than most players.

Harder played a key role in an impressive season for her club, Wolfsburg, who play in the Frauen Bundesliga in Germany.

The forward started all 12 of her league appearances in her first season with the club, which is an impressive feat on its own. During these appearances in the Bundesliga, she scored six goals, including a 14th minute one against Bayern Munich – which proved to be a decisive result in the race for the league crown.

Wolfsburg won the title in the end by a narrow margin of two points, and with the help of Harder, they were able to complete a domestic double. The Dane scored both of Wolfburg’s only two goals the League Cup final, essentially enabling them to lift the trophy.

Two pieces of silverware in one year is already impressive feat but her consistent form also ran through into international football – and Denmark presented a totally different challenge.

At 24 years of age, Harder is the skipper and leader of her national team. This summer, the Ikast native led Denmark to the final of the EUROS. Harder works extremely hard in the attacking midfield role she plays in, internationally. She works so industriously and often crafts opportunities out of the defensive shifts that she puts in on the international stage – and frankly, she is (almost) always the most dangerous individual player on the pitch.

While Denmark may have met their match in the Netherlands in the final of 2017 Women’s  EUROs, they knocked out the (six in a row) reigning champions Germany on the way – which put them on the map as a heroic team, under Harder’s captaincy.

Trophies and results aside, it is simply a pleasure to watch Pernille Harder play football.

She has the sheer instinct, skill and intelligence that is required from a number 10, but she marries this perfectly with creativity, flare and a deadly eye for goal. Take this video compilation of the play-making forward for example. Harder routinely glides past two, three, even four defenders at one time, like it’s nothing.

To be able to demonstrate talent and industry consistently on every platform, under different types of pressure and for two different teams is truly the mark of a world class player – and in 2017, in Europe, in my opinion, Pernille Harder has done it better than the rest.

Did you know? SHE KICKS casts the English media’s vote for UEFA BEST Women’s Player – we will bring you the images & the quotes from Monaco when the winner is revealed…