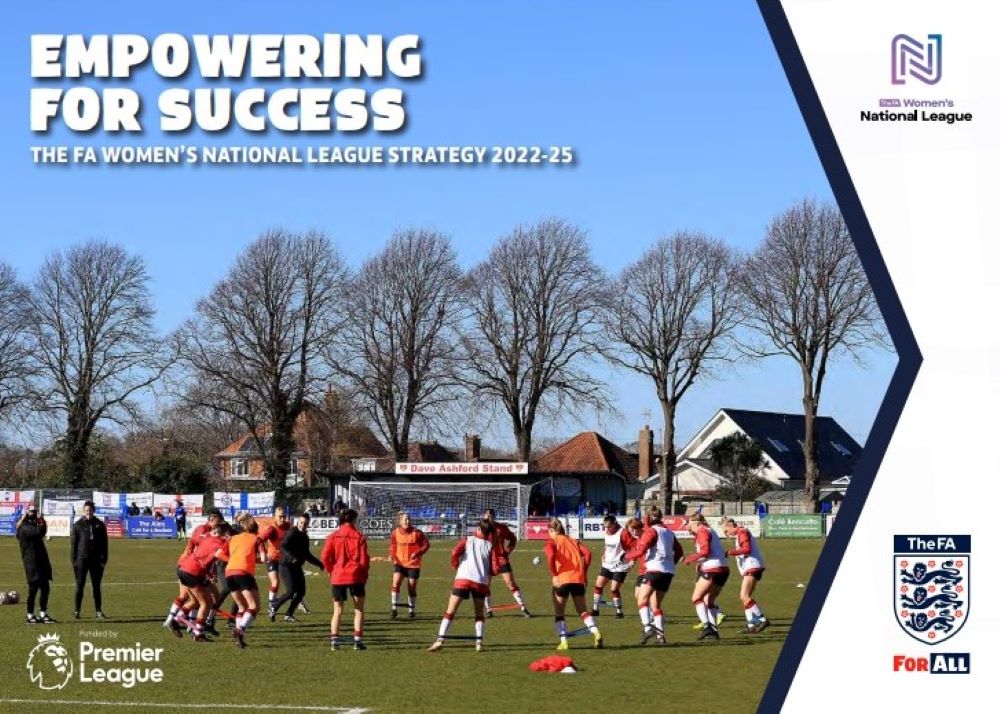 The FA Women’s National League has today launched a new strategy to strengthen the third and fourth tiers of women’s football in England.

The strategy, titled Empowering For Success, is backed by £1 million of investment per season for the next three years from the Premier League.

The strategy aims to ensure the advancements in quality across the professional game are also harnessed throughout Tiers 3 and 4 of the women’s football pyramid. Empowering For Success is focused across eight priority areas, each with their own strategic goal, ultimately enabling FA WNL clubs to flourish both on and off the pitch through the development of players, workforce, and infrastructure. The eight priority areas are:

The strategy unveils multiple commitments from The FA WNL across the eight priority areas to achieve each strategic goal. These include: increasing the number of female coaches in The FA WNL, as well as those from historically under-represented communities; creating a dedicated pool of match officials specialising in women’s football; reviewing the competition structure; introducing minimum club requirements to support player development; providing opportunities for players to engage in non-playing roles within football.

Empowering For Success was created in collaboration with FA WNL member clubs, ensuring a range of voices from administrators and coaches to players and fans were all given the chance to help shape the future of the league. By 2025 the strategy hopes to increase the recognition of The FA WNL amongst women’s football fans, decrease the number of weather-related postponements per season, increase the number of league commercial partners and increase the average attendance of league fixtures.

Baroness Sue Campbell, The FA’s Director of Women’s Football, said: “The launch of this strategy is game-changing for the women’s football pyramid. It will ensure The FA WNL can maintain pace with the wider growth of the women’s game, and the clubs and their players can thrive both on and off the pitch. We want to say a huge thank you to the Premier League for their support, without which none of this would be possible. The money they are investing will transform the experience of everyone who plays in the third and fourth tiers of women’s football.”

The Premier League has also announced additional support for clubs in Tiers 3 and 4 of the women’s football pyramid through the Premier League Stadium Fund. Eligible clubs can apply for grants of up to £20,000 to support the improvement of their stadium facilities, making grounds more welcoming for all and enhancing the playing and spectating experience within women’s football. The FA will be working with clubs to identify their facility needs, with funding being made available this summer. The Football Foundation will be handling the grant administration.

Sandi Dosanjh, FA Women’s National League Board Chair, said: “I am incredibly proud and humbled by the collective efforts of The FA WNL board and management committee and The FA to develop a strategy that will prove to be a watershed moment for women’s football. For the players, coaches and fans of our clubs, we have truly been inspired by your passion for the game and will implement this strategy to take the league to the next level. The FA WNL is uniquely placed within women’s football to inspire positive change for communities around the country, whilst taking on-field quality to new levels. With the support of The FA, and with our strategy in place, the league and its clubs can continue to grow as the heartbeat of women’s football.”

Richard Masters, Chief Executive of the Premier League, said: “It is an exciting time for women’s and girls’ football in this country and we are delighted to be able to assist the development of the game with investment that will support FA Women’s National League clubs. Along with our funding for the Girls’ Emerging Talent Centres, it shows the Premier League’s commitment to provide opportunities for female players of all ages. We are proud of the investment we make to help develop football at all levels and this funding expands on the wide-ranging support we provide. Our clubs are committed to developing women’s and girls’ football and it’s important that the Premier League plays a role in this centrally.”

Quarter-final berths are to be played for in both the FA Women’s National League Cup and Plate competitions. Wolves versus Durham Cestria is a meeting of Northern Premier and Division 1 North leaders, while there are two all top-flight ties […]

Norton & Stockton Ancients secured the North East League title on Wednesday with a 6-0 victory at fourth-placed Farsley Celtic. Needing only to avoid defeat to be crowned champions ahead of Durham Cestria, they got […]