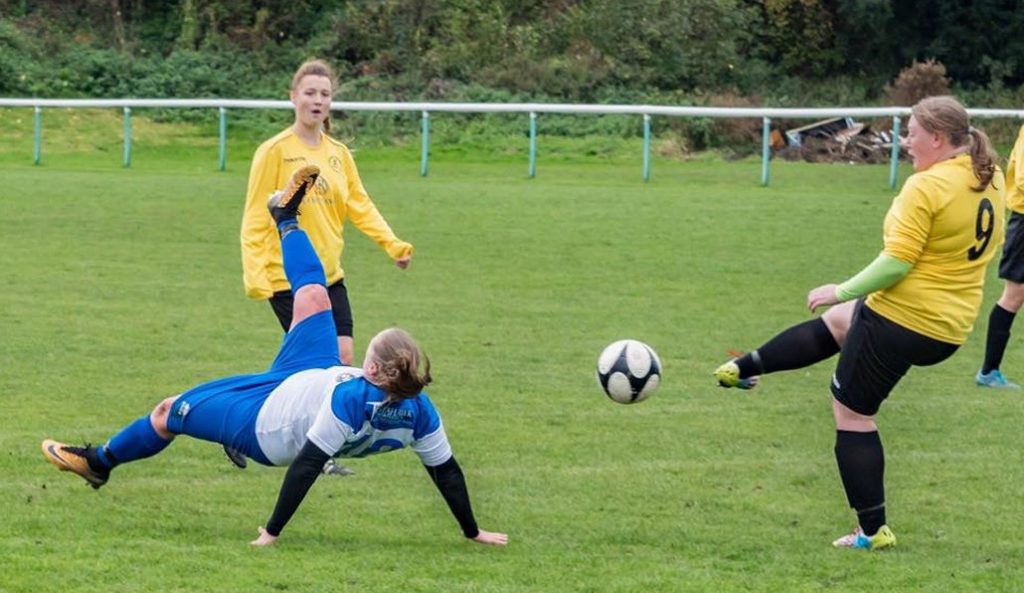 There were four changes of leadership in the Regional League Premier Divisions on Sunday, with Chesham United, Crawley Wasps, Crusaders and Nettleham now table-toppers.

PREMIER DIVISION – League leaders Writtle were held 2-2 at home by Brentwood Town, who were down to ten players for over half the match. Leah Cowan got one of Town’s goals but then suffered ligament damage and a possible broken ankle, following on from a dislocated shoulder last week. Billericay Town missed the chance to go top, losing for the first time 2-1 at Cambridge City, for whom Charlotte Gillies and Isabella Simmons were on target.

Royston Town did well to come away from Acle United with a point, Becky Shephard with the equalising goal just after half time. Holly Sheridan had Colney Heath ahead at AFC Sudbury but Rebecca Chandler replied to earn a draw. Charlotte South hit a hat-trick in AFC Dunstable’s 7-1 thrashing of Lowestoft Town. There was sad news earlier this week in that Colchester Town have folded.

1 SOUTH – Stevenage Reserves made it six straight wins to go nine points ahead of the rest, as Hayley Wood-Thompson got the only goal of the game against Harlow Town. Little Thurrock Dynamos came from 2-1 down at half-time to beat Hutton 4-2 and move into second spot. Hertford Town got off the mark and off the bottom, as the expense of Bishops Stortford, whom they beat 2-0 at home with a Donna Watts double.

PREMIER – Nettleham took over at the top, despite letting a two-goal lead slip at Loughborough Students. Sophie Crosby’s brace was matched by Grace Stanley but Tia Johnson grabbed an 83rd-minute decider. Leicester City WD’s 100% record went crashing with a 4-1 home defeat to Oughtibridge War Memorial, who rise to third.

Cobblers into pole position. Corby Town also stayed unbeaten with a 5-2 defeat of Heather, in which Nicole Coull netted twice. Peterborough United are another yet to experience defeat, having hit hosts Cosby United 8-1 with four goals from Keir Perkins. Elsewhere, Desford went down 6-1 to visitors Thrapston Town.

PREMIER – Crawley Wasps are the new leaders after a 6-1 win at Aylesford, where Naomi Cole and Holly Walker got a couple each. London Kent Football United’s Emily Hart claimed a hat-trick in the 4-2 victory over Carshalton Athletic, while Fulham ran in ten goals at Watford Development.

GREATER LONDON PREMIER – QPR Development remained top with a 3-0 defeat of Colne Valley, Spurs Development still on their heels following a 7-4 scoreline over Regents Park Rangers, in which Ellis Lunn got three. Whyteleafe made it four wins in a row with a 3-1 result at Hemel Hempstead Town, Hackney edged Hampstead 2-1 and AFC Wimbledon Development got off the mark in style, a 6-1 score against Victoire featuring a four-goal haul for sub Nyara Denny.

SOUTH EAST COUNTIES PREMIER – Crawley Wasps Reserves went from third to first when beating Kent Football United by the odd goal in three, while basement side Bexhill got their first point to deny Worthing the leadership. Chichester City Development came away from Ashford 3-2 victors, Meridian doubled their points tally in a 2-2 tie at Hassocks, Herne Bay also banked a second point when holding Eastbourne LFC 1-1.

PREMIER – Ryton & Crawcrook Albion Tynedale are fifth after a 4-0 result at lowly Castleford White Rose. Both York City and East Yorkshire Carnegie were without a point going into their meeting but it was the latter that claimed all three with a 2-1 scoreline.

SOUTHERN – Altofts goalless draw at unbeaten Sheffield Wednesday did take them top but saw the end of their perfect start. Doncaster Belles’ 2-2 tie at Ossett Albion was the first time they had avoided defeat.

ARGYLE SPORTS CUP 1ST ROUND – FC United began their defence of the cup by putting Penrith to the sword 11-0,  Fran Sullivan and Jess Battie both with trebles. Blackpool posted a 12-3 trouncing of Leigh RMI, Lydia Black leading the way with a hat-trick. West Didsbury & Chorlton’s Leigh McFadyen got a double in the win at Stockport County Blues, who replied with an 85th-minute penalty. Workington Reds went down 3-0 at home to CMB and Tranmere Rovers doubled that winning margin at Bolton Wanderers Reserves. Wigan Athletic saw off Morecambe Reserves 4-1 and MSB Woolton eliminated Manchester Stingers 5-1.

PREMIER – Chesham United lead on goal-difference from Ascot United, after they stormed to a 12-1 win at Team Solent, featuring five goals by Gemma Fraser.

1 NORTH – There was a first victory recorded by Oxford City Nomads, coming with a big 7-3 win over Wokingham & Emmbrook.

LEAGUE CUP 1ST ROUND – Megan Fox was the star for Warsash Wasps, with all five goals in the 5-4 extra-time result over Southampton WFC Reserves. Milton Keynes City’s Katie Crawley equalised at 3-3 to force extra-time with Wargrave, with City eventually winning 5-4 on penalties. Barton Rovers beat Newbury 3-2 for the second week running, Ascot United’s seven against Shanklin included a Lucy Holzman-Clarke treble and AFC Bournemouth were 5-0 winners at Eastleigh.

PREMIER – Yeovil Town Intermediate are level on points with second-placed Marine Academy Plymouth, having beaten Downend Flyers 3-0 with Charlotte Buxton netting twice. Exeter City made it two wins from as many games, with three first-half goals in a 3-1 result at Forest Green Rovers.

EASTERN DIVISION – Wootton Bassett Town’s fifth win on the spin put them top of the table, Team Mendip beaten 5-1 at home with Beth Westlake netting a hat trick. Frome Town are still without a point after a 2-1 home loss to Swindon Spitfires. Cheltenham Town Development and St Nicholas Reserves finished goalless, while FC Chippenham had a walkover against Cheltenham Civil Service.

WESTERN DIVISION – Bude Town posted a 6-2 scoreline over Exeter & Tedburn Rangers, with three goals from Sarah Badham and a couple by Charlotte Mulligan-Lang.

1 NORTH – Sutton Coldfield Town are five points clear after winning the top of the tale clash 2-1 at Wyrley. Leek Town and Goldenhill Wanderers both won 4-0 to go within a point of second position; the former winning at Bilbrook, the latter at Florence. It was unlucky thirteen for Atherstone Rangers, who conceded that many when hosting Shrewsbury Town. Charlotte Budd scored after a mere 8 seconds on her way to four goals, Nic Durnal added three and Katie Doster five. Shrewsbury Juniors also won on the road, 3-1 at Brereton Town.

1 SOUTH – Gornal go top on goal-difference, with the best of five goals at Solihull Sporting, while Solihull United slipped to a 4-1 reverse at Redditch United, who thereby rose to second. Kidderminster Harriers closed in on fourth in the table Droitwich Spa by sending them to a 5-0 defeat, Alex Nicklin with three of those goals. Coventry Sphinx climbed above Stourbridge by beating them 3-0, while Rugby Town claimed their first points by putting eight past Coventry Development.