From ignoring jibes behind the goal to representing her country, Wales international Mia North takes us through her footballing journey to date.

My journey in football started when I was around 10 years old. Due to there not being many girls’ teams around, I was forced to play in a boys’ team which was technically ‘mixed’.

At the time, playing in a boys’ team was more normal due to a lack of girls’ teams around, so the prospect of playing with boys did not really scare me, it just made me excited that I could play football properly.

There was a challenge though with the whole facade that ‘girls can’t play football’ and that I was an immediate weakness just because of my gender. As a result there was added pressure on myself to make even less mistakes,  because I felt like I had to prove myself and I did not want to think about how the boys would react or feel if they saw the girl making an error.

There were multiple occasions where I would have boys sit behind my goal and laugh at me for being ‘the girl in goal’. This could have easily been a point in my life where I stopped wanting to play but instead, I used it as a motivation for me to prove them wrong.

The social aspect for the first couple of years was a lot harder as well, seeing as the boys on my team were very different to me. I struggled for conversation starters and the boys were much rowdier compared to me, as I was quite shy so I struggled to make real friends.

However, they never made me feel inferior to them and the coaching staff and parents were also lovely, so there was enough enjoyment for me to carry on.

I finally joined a girls’ team when I was 12. I spent the next 3-4 years with this team, winning our league multiple times, multiple tournament victories and multiple county cup triumphs. During these years, I also stepped into the international environment and I was selected for a training camp with Wales U-19s at the age of 16.

Once I turned 16, I joined WSL team Yeovil Ladies where I spent the next two years of my career. The second year of being there saw me go into my first year of college in Bridgwater, meaning I had to move out and live in accommodation whilst training every day.

Moving out at 16 was a big change for me and there was one point where I did not want to do it. I was fearful of being home sick and missing my friends at school, but I ended up embracing the new environment more than my parents or I would have ever expected.

In my first year I never got homesick once! I still missed my friends, but I was enjoying the new independence and due to making lots of new friends at accommodation, I was always up to something and rarely on my own, so it became very easy.

Alongside this, it massively helped that I went home practically every weekend due to not having any games, so I was able to still see my parents and friends every week. As a result I was not thrown in the deep end of not coming home for prolonged periods of time straight away.

Being at Yeovil was when I first experienced academy football and played the likes of Manchester City, Chelsea, Arsenal, etc. I also had two first team bench appearances against Arsenal and Everton.

After my first year of college, I decided I wanted to move on from Yeovil, which saw me eventually end up where I am now – which is West Ham. Soon after playing with the U-21s, I was called up to the Wales U-19s squad for the Euro Qualifiers, where I enjoyed 10 days in Northern Ireland competing against Norway, Northern Ireland and Moldova.

Following this tournament, I had another call up to the [West Ham] first team, after which I completed the rest of the season with the U-21s – before COVID-19 hit and our season unfortunately had to be made null and void.

If we skip to the present day, I am currently a first year student at UEL and in my second year with West Ham. I came out of college with three distinction stars in my BTEC and have just completed my first term on Sports and Exercise Science, where I achieved firsts across all my modules. 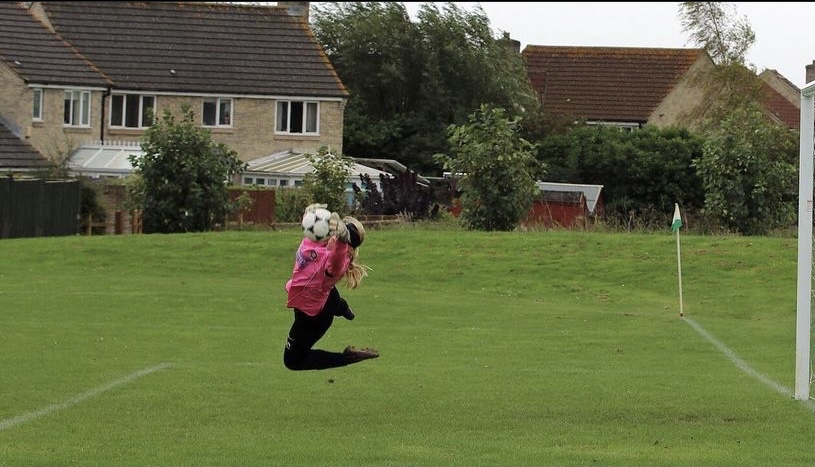 I am now on loan at Dulwich Hamlet, where I am looking to gain experience within the women’s game and also looking to develop massively as a player.

When I look at the modern women’s game now, it definitely has come a long way since I first started playing. First of all, I think in a way we have benefitted from less exposure. The women’s game has a lot less dramatics, much less diving and dialogue on the pitch itself is definitely less violent.

However, the recent WSL deal with Sky Sports is a really exciting one and one which I hope will start to give the game the exposure it needs to be more successful. Hopefully over the next few years, the game will grow exponentially and we will hopefully see more equity between the men and women’s game.

Furthermore, if I think back to when I was young, there were few women’s teams around my local area and across the country there were not many professional academy setups – this is why the county route for girls was so prevalent. Nowadays that has changed.

For instance, West Ham have the West Ham Foundation where they coach and bring up young girls through their ranks, which a lot more highly affiliated clubs are now doing. You’ve also got ambitious clubs like Dulwich Hamlet who want to grow the women’s side of the game without the privilege of partnering with Premier League clubs.

If I was born in that generation, I think the pressure on me would have definitely been higher because I would be in a more professional setup playing alongside other girls.

However, there are so many positives that come from academies and a more stable pathway from grassroots for young girls will do wonders, not only in terms of ability but also to provide the belief that football can be more than a hobby.

Looking back now, I am glad I got to just enjoy football as a fun hobby before joining Yeovil Academy because when you are so young, I think enjoyment is the most important thing. Importantly though, I am looking forward to seeing how far I can go with the help of professionals in the game!

Dulwich Hamlet have secured the loan signing of young West Ham Women’s goalkeeper Mia North for the 2021-22 season.  The 19-year-old, who is part of the Hammers’ academy programme, was previously at Yeovil Town and […]