Hundreds of young fans cheered on the Birmingham City Ladies at the Automated Technology Group Stadium just over a week ago (on Sunday, January 14th) for the re-arranged winter fixture, which resulted in a 2-0 win over Bristol City Women.

And to kick-off 2018 in style, Birmingham City Ladies’ largest ever commercial partner, Maple from Canada UK, offered one lucky competition winner the chance to lead the squad out of the tunnel pre-match. 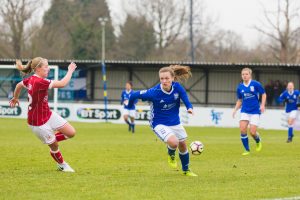 The partnership, which centres around promoting the health benefits of pure Canadian maple as a natural source of energy and inspiring young women and girls to partake in sport, produced another remarkable success story.

It was Birmingham who delivered a stirring display in front of goal with fan-favourite Aoife Mannion breaking the deadlock, before top-scorer Charlie Wellings (pictured above) finished off a brave Bristol City side with a second goal.

But for the competition winner, nine-year-old budding footballer Kaitlyn Hicks-Kenward, the best result of the day was getting to see her hero, Blues defender Paige Williams. The former Brescia star is also Kaitlyn’s football coach!

As part of her prize, Kaitlyn received a maple-branded Birmingham City Ladies home strip, which she sported with immense pride as she posed for a photo with her idol.

Following the final whistle, Maple from Canada was invited to name the Player of the Match, which was awarded to defender Aoife Mannion for another inspiring display at centre-back.

What was notable and fun after the game was the gratitude shown by Birmingham’s professional footballers towards their young fans. England star Jess Carter, young goalkeeper Hannah Hampton and their teammates stopped to sign squad photographs and maple recipe cards at full-time.

Next up for the Blues is a home match v Yeovil Town Ladies (Solihull Moors FC, 28 Jan, 2pm ko), as Maple from Canada continues its journey to inspire young girls to get involved in sport, across the country.