Sweden were comfortable 2-0 winners over Russia in Deventer on Friday, before Germany edged Italy 2-1 in the other Group B game played in Tilburg.

Tatyana Shcherbak had played a big part in Russia’s win over Italy but two mistakes saw her side struggling against Sweden, who had begun with a goalless draw against Germany.

Lotts Schelin opened the scoring midway through the first half, heading home as Shcherbak came for the ball but failed to get there.

Russia were causing themselves more problems early in the second half and went 2-0 behind when they were made to pay for a poor clearance.

Stina Blackstenius picked up the ball  and showed strength to hold off a challenge and shoot under the keeper, with a Anna Kozhnikova only able to help the ball in off the post.

Fridolina Rolfö went close to a wonder goal with fantastic control of a ball over the top but the Swede volleyed too high and then Shcherbak pulled off an acrobatic stop to deny Blackstenius. 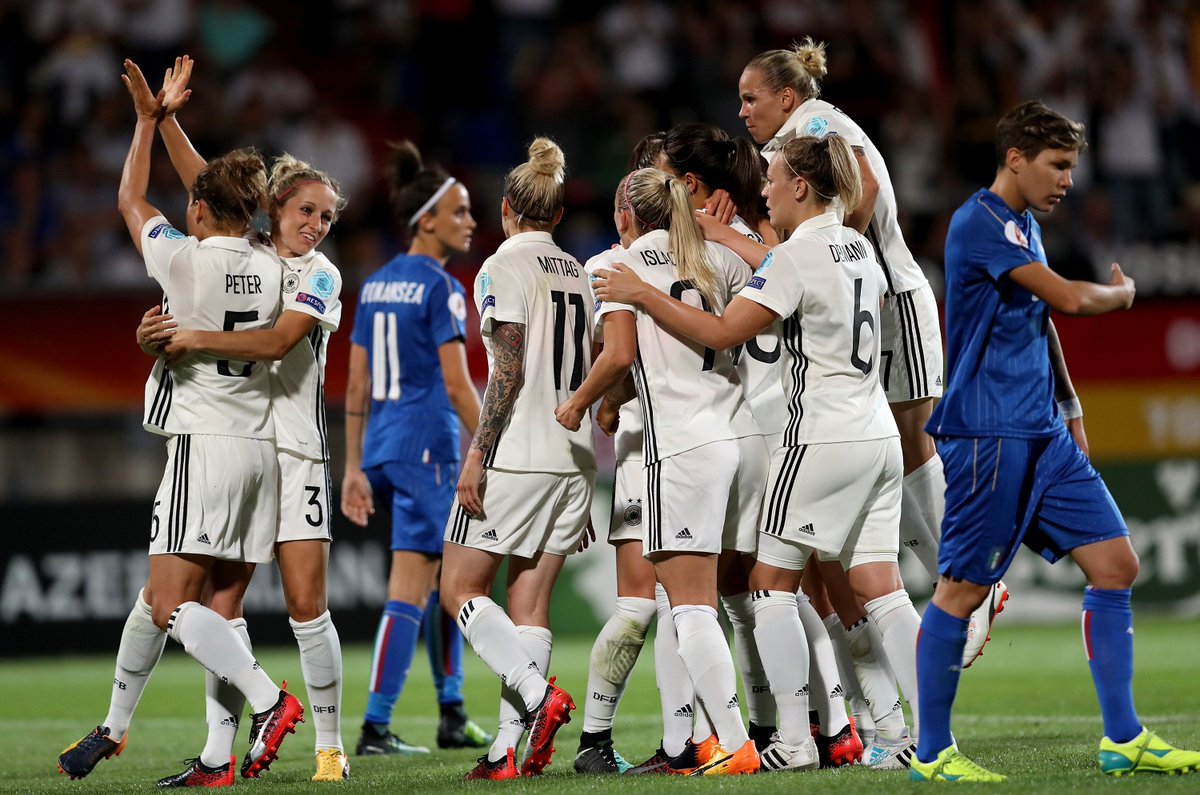 A narrow win for Germany put them on four points along with Sweden and meant Italy failed to reach the quarter-finals for the first time.

Germany were ahead on 19 minutes when Italian keeper Laura Giuliani failed to grasp a free-kick and Josephine Henning headed into an empty net.

It was very nearly 2-0 minutes later, as Anja Mittag forced Giuliani to tip over the bar and via the resulting corner, Sara Dabritz struck the post.

But Italy broke away on 29 minutes and with a fine Barbara Bonansea run and inch-perfect pass, Ilania Mauro slotted the ball between the legs of goalkeeper Almuth Schult.

Her opposite number was soon in action again though, turning a Dzsenifer Marozsan drive around the upright before the Azzurre had the disappointment of losing Mauro before the break when landing awkwardly.

Within 4 minutes of the restart, Mandy Islacker twice went close, hitting the post and later seeing her header tipped away from goal.

Midway through the second half it all went wrong for Italy, as Mittag won a penalty which Babette Peter converted and then Elisa Bartoli received a second caution.

They still had chances though, as Cristiana Girelli met a corner with a strong header but straight at the German keeper and Bonansea’s driven set-piece was kept out by Schult’s diving save.

Sweden booked their place in the last sixteen of the World Cup with a 5-1 victory over Thailand, USA were restricted to a 3-0 win by Chile and star goalkeeper Christiane Endler. GROUP F Thais […]

I was SO glad to have been beyond the simultaneous, multiple screening days, then came the two most stressful semi-finals I can remember. What the hell Olympic football tournament? What. The. Hell?! As we had […]