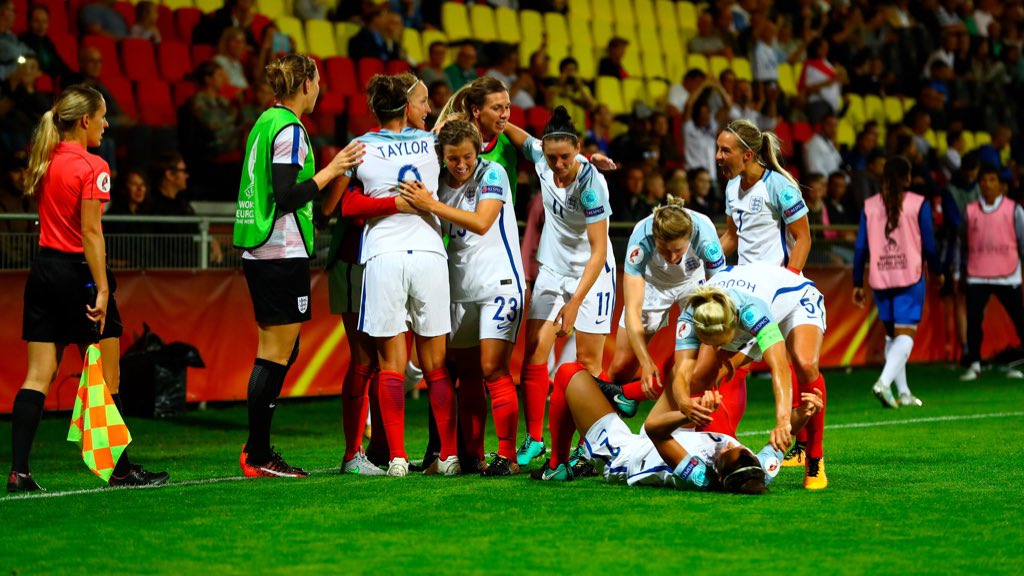 Jodie Taylor got the only goal as England beat France for the first time ever in a competitive match, setting up a EURO2017 semi-final with the Dutch in Enschede on Thursday.

A lively opening saw Jordan Nobbs send in a long-range free-kick which Sarah Bouhaddi could only gather at the second attempt and for France Marie-Laure Delie dragged a shot wide of the far post.

Millie Bright didn’t connect well enough with Jordan Nobbs’ far post free-kick to find the target, then at the other end Lucy Bronze made a crucial tackle to halt Delie when France threatened on the left.

Jill Scott was out of any semi-final after collecting a second tournament caution, diving in to bring down Amandine Henry.

Eugenie le Sommer led a couple of swift counter attacks which England dealt with, as a tight first half ended goalless.

After the break, Delie was left unmarked on the edge of the box but England had a let off as she failed to control the ball.

Le Sommer was wide when easily winning a header but when the game’s first effort on target finally came around the hour mark, it was the Lionesses who had it.

Bronze broke forward and slipped the ball into the path of Jodie Taylor, whose shot across the keeper went in despite Bouhaddi getting a hand to it.

Bronze then played a crucial part in front of her own goal, heading over a shot from Kaddidiatou Dani.

Nobbs played a good ball through to Taylor, who took the shot early and forced Bouhaddi to get down to make the save.

England lost keeper Karen Bardsley to injury, replaced by Siobhan Chamberlain, whose first involvement was an unconvincing punch but Elodie Thomis was wide with the follow-up.

England needed a couple of blocks to keep Les Bleues out and the attack ended with Claire Lavogez firing wide.

Jade Moore conceded an 88th-minute free-kick for a foul on Lavogez 25 yards out but Henry sliced it well wide.

Le Sommer got in a 94th-minute header but it was straight at Chamberlain and that was the last chance for France.

Ellen White has been called up to Phil Neville’s England Women’s squad for the November internationals against Germany and Czech Republic. White joined up with her England team-mates at their St. George’s Park training base […]

#Lionesses U-19s bow out to Germany

England went down to a 3-2 defeat against Germany in their UEFA U-19 Elite Round group decider. The Young Lionesses suffered an early setback in their bid to beat Germany and win the group, as […]