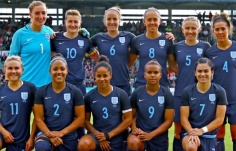 The Duke of Cambridge, President of The Football Association, will host the England team at Kensington Palace on Thursday 13 July.

The Duke has invited the squad for a good luck reception at the Palace, before they fly to the Netherlands for Euro 2017.

He will then join the Lionesses for a kick-about with a local girls team from the SSE Wildcats football programme at the sports and social club at Kensington Palace, where the girls will get the chance to play with their England idols.

This year, FA Girls’ Football Week will run between 16 July and 6 August to coincide with England’s involvement in the Euros. It will be an opportunity to support the Lionesses’ finals campaign and get even more girls playing football this summer.

England will travel to the Netherlands on 13 July, where they kick-off their Group D campaign against Scotland in Utrecht on 19 July, before facing Spain in Breda on 23 July and Portugal in Tilburg four days later.