England made it three straight wins in Euro 2017’s Group D to set up a clash with France but Scotland missed out on the quarter-finals despite a 1-o defeat of Spain.

Mark Sampson made ten changes to the Lionesses side but it still only took 6 minutes for them to find the net.

Toni Duggan marked her 50th cap with a finish from outside the box – a quality strike compared with a howler of a clearance from goalkeeper Patricia Morais.

However, Portugal were not going to make it that easy for England and they were level through Carolina Mendes on 16 minutes, who slotted home from close range after the first cross by Diana Silva was blocked by Laura Bassett.

Moments later and Mendes was inches from getting her head to a very clear chance on goal, with Siobhan Chamberlain exposed.

England regained the lead early in the second half, Izzy Christiansen knocking the ball on and Nikita Parris riding two challenges before sliding the ball through the keeper’s legs.

Laura Luis had the last opportunity to get Portugal a crucial point but her volley was comfortably gathered by Chamberlain.

England now face a huge clash with France in the quarter-finals on Sunday evening, looking to beat Les Bleues for the first time since 1974. 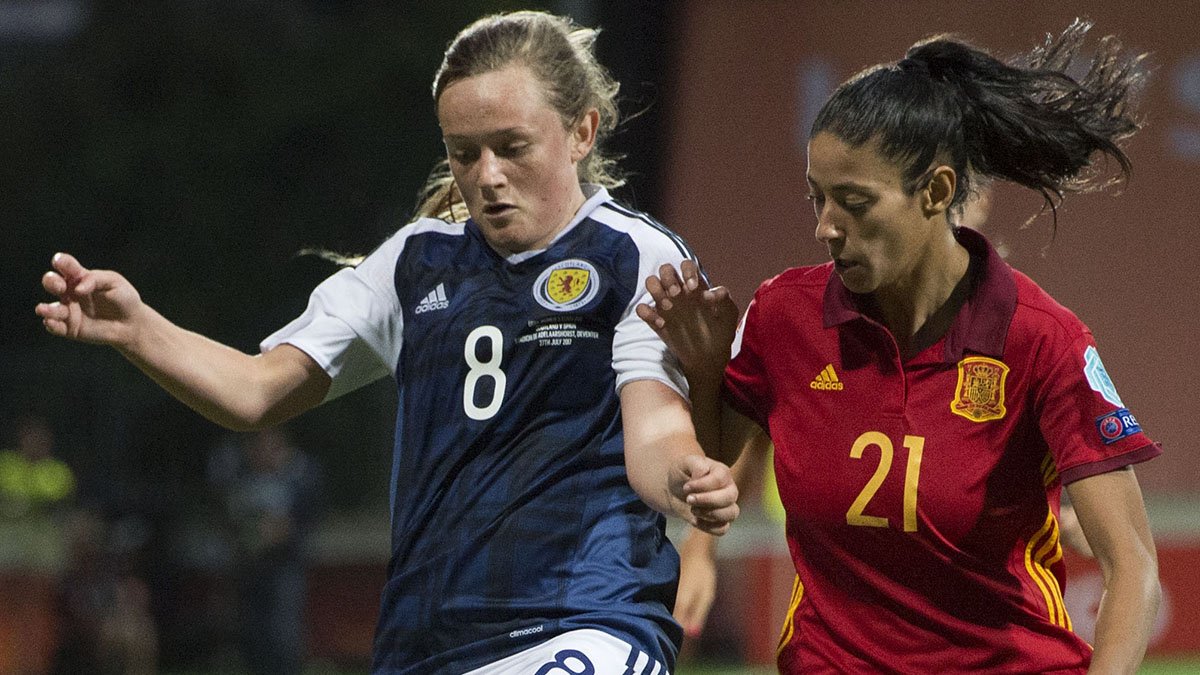 Scotland’s first major finals are over, all for the want of a second goal against Spain, who instead go through to face Austria in the last eight.

Gemma Fay was busy for Scotland, turning away a Marta Torrejón free-kick, pulling off a brilliant double save from headers by Jennifer Hermoso and Irene Paredes, then escaping with only a caution when handling outside the box.

Despite all that it was Anna Signeul’s side who scored 3 minutes before the break, as keeper Sandra Panos – under pressure from Ein Cuthbert – failed to deal with Leanne Crichton’s ball over the top and Caroline Weir squeezed her shot between the legs of Paredes on the line.

Crichton could have scored herself 5 minutes into the second half from Weir’s corner but after that Scotland were struggling to keep the lead.

Silvia Meseguer hit the bar and after Fay dealt with an effort by Alexia Putellas, the rebound came to Maria Paz, whose header forced Ifeoma Dieke to nod off the line.

Scotland did have a late chance to get that all important second goal but Crichton could not direct Weir’s set-piece on target.

England began Phil Neville’s reign and the 2018 SheBelieves Cup, with a best ever result against France at the wind-blown MAPFRE Stadium in Ohio. The Lionesses took only 7 minutes to score, Nikita Parris finding Fran […]

Beth Mead has withdrawn from the England squad ahead of their training camp in Qatar, reports TheFA.com. The 23-year-old Arsenal forward suffered a knee injury in Sunday’s FA WSL match against Chelsea. Manchester City’s Melissa […]