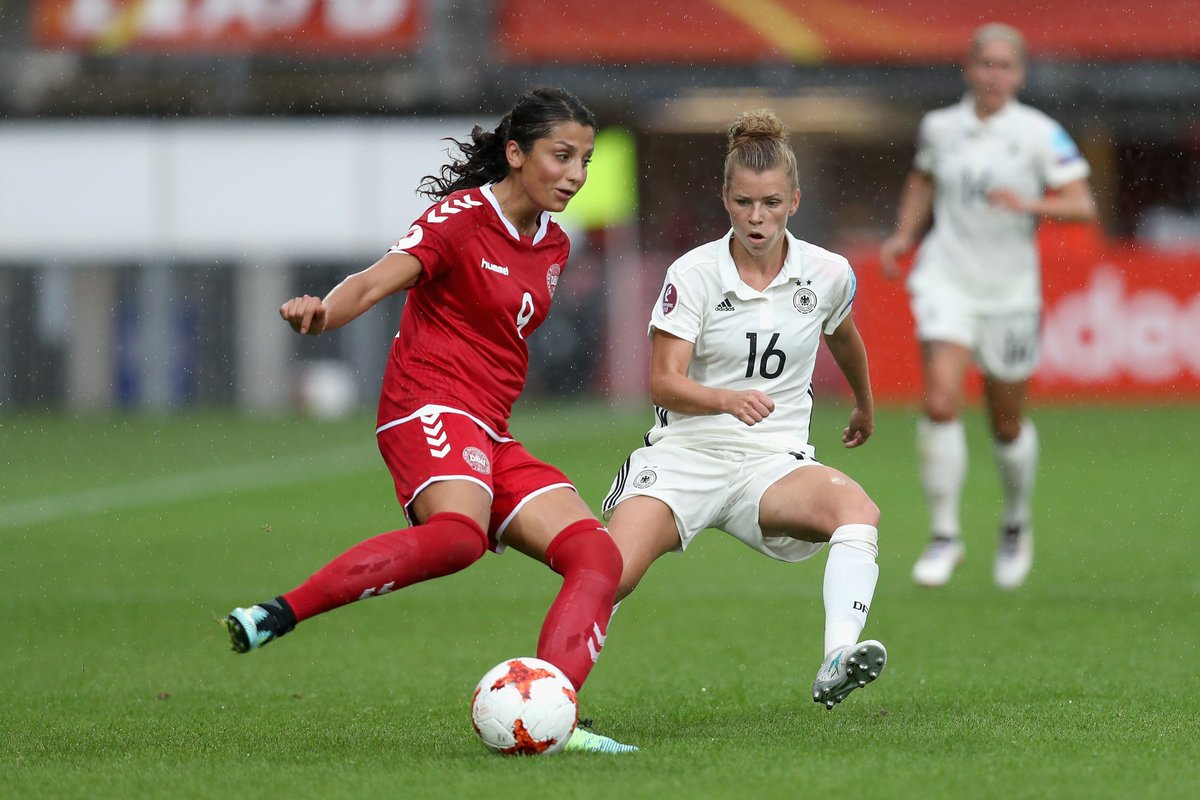 Denmark caused the upset of EURO2017 by eliminating Germany, who had won all the last six finals.

That seemed the most unlikely of outcomes early on in the second quarter-final, which finally got underway after a third pre-match warm-up, following the previous evening’s rain-drenched fiasco.

Just 3 minutes in and Danish keeper Stine Lykke Petersen made a horrible error, spooning Isobel Kerschowski’s effort into her own net instead of over the crossbar.

The Danish keeper did then regain confidence by saving from Dzsenifer Marozsán and after Pernille Harder shot narrowly wide at the other end, Petersen twice dived to push away Kristin Demann strikes.

Theresa Nielsen caused a little panic in the German defence with her dangerous ball across and soon after Harder didn’t make the most of a clear chance on goal, firing tamely at keeper Almuth Shult.

Sanne Troelsgaard forced Shult into a tip over but Nadia Nadim headed too high from the corner and with the last kick of the half, Marozsán fired inches over the bar from 25 yards out.

Just over 3 minutes into the second half, Germany paid the price for not playing to the whistle, Stine Larsen continuing with play whilst the holders stopped and crossing for Nadim’s downward header to level the scores.

With several chances at both ends, Linda Dallmann was denied by Petersen either side of Katrine Veje clipping the angle when she should have put the Danes in front.

Anja Mittag headed over the bar from Sara Dabritz’s cross and Lina Magull’s shot was deflected only just wide of the Danish goal, as the holders threatened.

But with 8 minutes to go, Nielsen headed in Frederikke Thøgersen cross and Germany could not find a reply.

Denmark will now face either Austria or Spain for a place in the final.

A thrilling finish in Rotterdam included a disallowed goal and a shot turned against the bar then cleared off the line, as Russia held on to beat Italy 2-1. The Russians had failed in […]

In a repeat of the Euro 2017 Final, Netherlands beat the Danes 3-2 at the Algarve Cup with two late goals, while Denmark had a player dismissed. It was a second win in a row […]

Photo: @SFA Switzerland got off the mark with a narrow 2-1 victory that eliminated Iceland but face a battle to get into the quarter-finals. Iceland and Switzerland both needed a positive result in Doetinchem, having […]