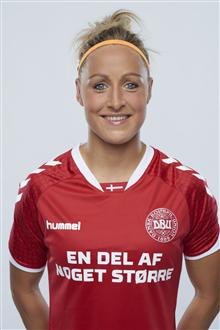 An early goal was enough for Denmark to defeat Euro finals debutants Belgium in Sunday’s second Group A encounter.

In the sixth minute, Red Flames’ keeper Justien Odeurs touched a Pernille Harder free-kick onto the bar but player of the match Sanne Troelsgaard rose highest to head home the rebound.

Tessa Wullaert had the Belgians first chance on goal but fired over the top, before Lenie Onzia shot wide from distance, with Nadia Nadim denied at the other end.

Seven minutes after the interval and Denmark custodian Stina Lykke Petersen kept out a backheel by Janice Cayman.

Substitute Maja Kildemoes played Nadim in but the chance to make the game safe was missed, as her strike was off target.

Wullaert threatened again but her shot was blocked by Simone Boye, before Belgium twice went very close to levelling in the dying minutes.

A deflected shot came back of the woodwork with 3 minutes left and in the last minute Line Roddik was forced into a goal-line clearance to maintain Denmark’s slender advantage.

Tuesday’s fixtures see Italy and Russia get Group B underway in Rotterdam at 5pm, with Germany and Sweden going head to head at 7.45pm in Breda. Both matches are live on Eurosport and channel4.com

Lionesses On Verge Of #WEURO2017 Quarter-Finals

England are on the verge of a place in the last eight of Euro 2017 after a hard-fought, and eventful, 2-0 win over Spain in Breda. Fran Kirby swept home a wonderful opener after […]

(Photo – fpf.pt) Scotland need other results to go their way to continue their Euro 2017 journey, following a 2-1 loss against Portugal in Rotterdam. Scotland hit the woodwork twice during the match but were […]